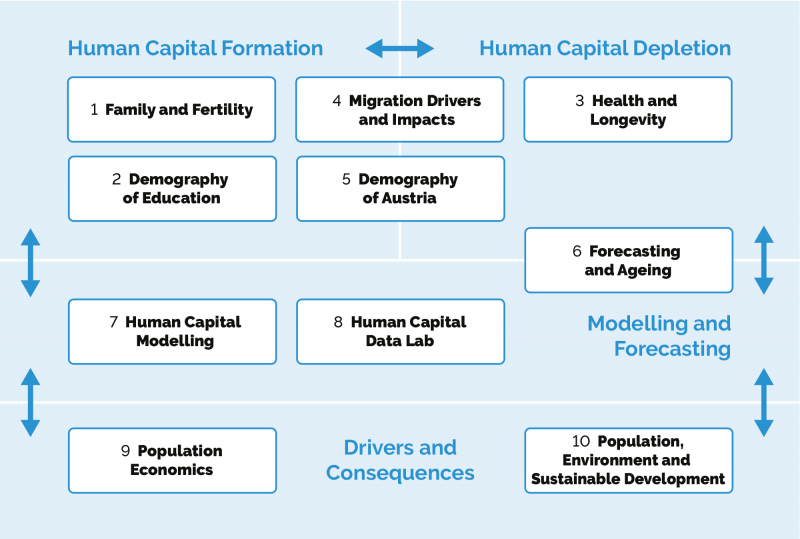 The scientific goal of Wittgenstein Centre’s research is to significantly advance the global frontier in modelling and understanding the drivers and consequences of changing population structures around the world – past, present and likely future. We explicitly address multiple dimensions of population structures that go beyond the conventional analysis by age and sex. Substantively, we focus particularly on the roles of human capital formation and global population ageing and on the interactions of these trends with the social, economic and natural environment. We use the rich methodological toolbox of demography and in particular the methods of multi-dimensional population dynamics for quantitatively addressing the “quality dimension” of changing human populations.

As shown in the Chart, the research of WIC can be structured into four broad research themes that together form a coherent and comprehensive research agenda. These four themes focus on human capital formation and depletion, on modelling population dynamics, and on studying the interactions with the social, economic and natural environment. This focus on human capital is based on the broader understanding of demography as studying the changing size and composition of populations (definition according to IUSSP, the International Union for the Scientific Study of Population) notably by important sources of heterogeneity that go beyond the conventional age and sex. It applies the methods of multi-dimensional population dynamics (developed in and around IIASA in the 1970s) and gives special attention to education, health and labour force participation as constituents of human capital.

The Wittgenstein Centre aspires to be a world leader in the advancement of demographic methods and their application to the analysis of human capital and population dynamics. In assessing the effects of these forces on long-term human well-being, we combine scientific excellence in a multidisciplinary context with relevance to a global audience. It is a collaboration among the Department of Demography of the University of Vienna, the World Population Program of the International Institute for Applied Systems Analysis (IIASA) and the Vienna Institute of Demography of the Austrian Academy of Sciences (VID/ÖAW).