The Wittgenstein Centre for Demography and Global Human Capital (IIASA, VID/ÖAW, WU) publishes a summary of its achievements. 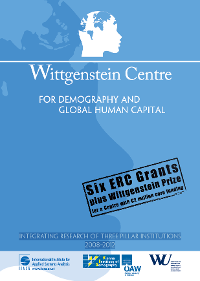 The Centre is a collaboration among the World Population Program of the International Institute for Applied Systems Analysis (IIASA), the Vienna Institute of Demography of the Austrian Academy of Sciences (VID/ÖAW) and the Demography Group of the Vienna University of Economics and Business (WU). In late 2010, a letter of understanding was signed by these three pillar institutions defining the
terms for this collaboration under a common roof.

The Centre combines the partners’ strengths in the fields of demography, human capital formation and analysis of the returns to education. It builds on a highly successful collaboration that has already generated significant scientific advances. “Human capital” refers to the human resource base in terms of the number of people and their changing structure by age, gender, location, education, health status, cognitive skills and other relevant characteristics. Our intent is to provide a sound scientific foundation for decision-making at various levels.

The 5-year report entitled "Integrating Research of Three Pillar Institutions 2008–2012" introduces these efforts by presenting achievements and results as well as core scientists and their focus. Download