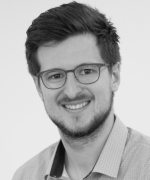 Michael Freiberger joined the IIASA Economic Frontiers (EF) Program in 2021, to work on the modeling of economic problems related to disruptive change, COVID-19, and health.

Michael Freiberger obtained his masters degree in Applied Mathematics in Economics and Statistics at the TU Wien in March 2017 with a focus on dynamic macro-economic modelling, population and environmental dynamics and mathematical optimization. In 2015 he spent a semester at Stockholm University, where he took courses about the sociological aspects of economic development and population processes. During his studies he also contributed to research at the Institute of Statistics and Applied Mathematics in economics through his collaboration in several projects under the supervision of Alexia Fürnkranz-Prskawetz. In April 2017 he joined Vienna Doctoral Programme on Water Resource Systems, where he analysed the economic aspects of socio-hydrological models, which describe the interaction between the population and the water system. In April 2018 he joined the Wittgenstein Centre to work within the project ‘Life-cycle behaviour in the face of large shocks to health’.