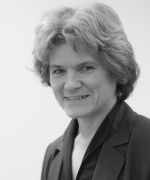 Alexia Fürnkranz-Prskawetz is deputy director of the Vienna Institute of Demography at the Austrian Academy of Sciences. From 2017 to 2019 she was director of VID/OeAW. She holds a doctorate in mathematical economics from the Vienna University of Technology (TU), as well as a second doctorate (Habilitation) in population economics and applied econometrics from the same university.

She is professor in mathematical economics at the Institute of Statistics and Mathematical Methods in Economics at the Vienna University of Technology, a research associate at the International Institute for Applied Systems Analysis and one of the five directors of the Wittgenstein Centre for Demography and Global Human Capital, of which the Vienna Institute of Demography is one of three pillar institutions.

Alexia Fürnkranz-Prskawetz is working in the field of the economics of population and individual ageing, long-run economic growth, agent-based models and environmental economics. She has published numerous articles in refereed scientific journals and edited special issues of economic and demographic journals.