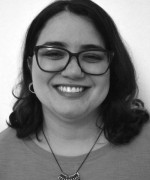 Raquel Guimaraes is a Guest Research Scholar with IIASA. In addition, she is an Assistant Professor at the Federal University of Parana (Brazil), in the Department of Economics and in the Graduate Program in Public Policy. She teaches undergraduate and graduate courses in economic demography, development microeconomics, and methods for evaluating public policies. Her current research includes population and environment, education demographics, economic demographics, and development economics. Dr. Guimaraes graduated in Economics from the Federal University of Minas Gerais, (UFMG), Brazil in 2007, has a master's degree (2010) in Demography from UFMG, a master's degree (2012) in Comparative International Education from Stanford University, and a PhD (2014) in Demography also from UFMG. She has also spent time as a postdoc at IIASA, working with the World Population (POP) Program.