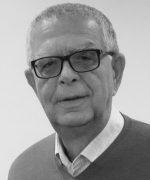 Dimiter Philipov has a long-lasting career as a demographer. He worked at the Human Settlements and Systems Area at IIASA during 1977-1982. He worked also in the Bulgarian Academy of Sciences and, after a one-year visit at the Princeton University, at the Max-Planck institute for Demographic Research in Rostock-Germany (1998-2003). As of 2003 he works at the Vienna Institute of Demography at the Austrian Academy of Sciences, and in October 2013 he joined the World Population Program (POP) at IIASA to work at the "Reassessing Ageing" project on issues related to disability.

Dimiter Philipov's scientific interests are in studies on fertility and family, and recently on disability. He has also specific interests in studies on subjective individual measures such as intentions and expectations related to demographic events. He worked in several EU-funded Projects and was frequently summoned as an expert at UN and EU organizations.