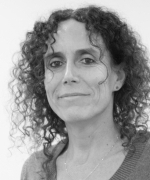 Goujon is a demographer. She first joined the former IIASA World Population Program in January 1994 as a research assistant. She received her PhD in social and economic science from the University of Vienna, Austria, in 2003, and her master's degree in development economics from the University La Sorbonne in Paris, France, in 1990. From 1991 to 1994, she occupied several positions within the development community (the United Nations Educational, Scientific and Cultural Organization (UNESCO) in Paris; the United Nations Children's Fund (UNICEF) in New York; the European Centre for Development Policy Management (ECDPM) in Maastricht, Netherlands; and "EquiLibre" a non-governmental organization in Iraq). Since 2002, she has also been a researcher at the Vienna Institute of Demography (Austrian Academy of Sciences) where she leads the Human Capital Data Lab (since 2014 - on leave). From March 2020 to March 2022, she worked as a researcher in the Knowledge Centre for Migration and Demography (KCMD) at the European Commission Joint Research Centre (JRC) in Ispra, Italy.

Goujon's scientific interests lie in the macro-level analysis and projections of background characteristics of the population acquired during childhood that rarely change once an individual has emancipated from parental control, such as education and religion. She has applied the methodology of multi-state population projections to many settings, using scenarios to show the impact of the long-term dynamics of demographic change on these characteristics, and conversely, the impact of heterogeneous demographic behaviors of these groups on the overall population.